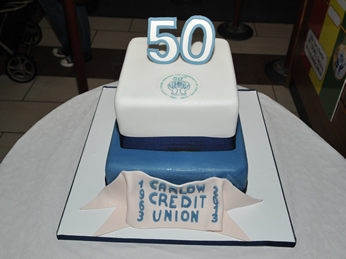 Carlow District Credit Union Ltd., marked its 50th. Anniversary on 8th. March 2013 by hosting a Member Day in their offices, exactly 50yrs since they opened their doors in Carlow town. A special honour was bestowed on Carlow CU the night before when Carlow Town Council honoured the financial institution by hosting a Civic Reception in the Town Hall.

Established in March 1963, Carlow District Credit Union Ltd., has become one of the town’s best loved financial institutions. It has become known as the bank with a heart, a personality and a human touch.

Over 150 people packed into the council chambers, with past presidents, directors, staff and volunteers. Also present was Jimmy Johnstone, President of the Irish League of Credit Unions and Nick Cashin, Chapter Liaison Officer and ILCU Director.

In his address, Jimmy Johnstone congratulated Carlow District Credit Union Ltd., on reaching this important milestone. “Your undoubted success has been due to the unfailing voluntary efforts of its Directors and the professionalism of its staff and their continued commitment to Credit Union cooperative self-help principles. On behalf of all in the Irish League of Credit Unions, I wish you well in your celebrations and I wish you continued success in serving your members as we face the future with confidence” he said.

Cathaoirleach of Carlow Town Council, Eileen Brophy, spoke about the positive impact the Credit Union has had on Carlow town since it’s inception. In a touching gesture, the Cathaoirleach was presented with a cheque from Carlow District Credit Union Ltd., to donate to a charity of her choosing. A visibly touched Councillor Brophy gratefully accepted the gesture promising to carefully choose a deserving charity.

Carlow CU President Tom O’Neill said in his speech that it was an honour to be at the helm of such a great organisation who have been loyally serving the financial needs of the communities of Carlow town and its surrounding areas.

“To our founder members I say a big thank you, it was your vision and hard work that Carlow District Credit Union Ltd., is celebrating now. We look ahead to the next 50yrs and with everyone’s help, we can continue to do what we do best, serve you the people of Carlow .

A special Member’s Day was held on Friday 8th. March in the offices of Carlow District Credit Union Ltd. Hundreds of members filed through the doors and met with Directors, volunteers and staff. Celebrations went on all day with refreshments served by local caterers. Students from Carlow CU Youth Advisory Council were on hand also to help on the day.

Contact details for our other branches can be found here

Opening times for our other branches can be found here